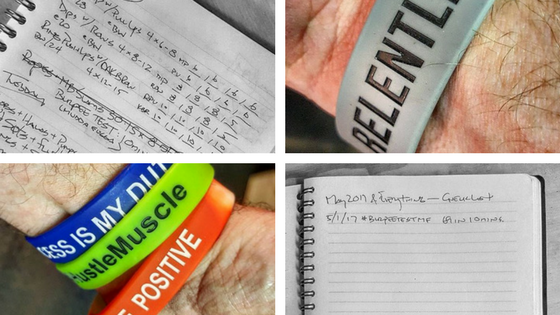 #2017ofEverything The MAY Challenge has begun

https://www.facebook.com/groups/jesseitzler/permalink/1874503099490049/ The #2017ofEverything May challenge is not just underway, but almost half way done.  If you follow the link up there, you can join the Facebook Group and participate in the challenges.

THE NUTSHELL:  Jesse Itzler of Living With A SEAL fame is posting physical (and mental) challenges each month and then donating money to specific charities.  The better you do and the more frequent you are with the challenges, the more money he donates.  The benefit to you is that you’re getting in a great workout and now have something to work for.

Your pain and suffering is for a good cause!

There’s an interesting dichotomy going on here.  Elite military units have SIU Pills (SIU = suck it up) to help you get through training.  They also have a slew of other phrases that keep you motivated and help win the war raging in your mind as you endure the hardships.  “Pain is weakness leaving the body” comes to mind.   “If it doesn’t suck, we don’t do it” also stands out.

Then there’s the “civilian” world.  Where comfort is king and just getting by is the norm.  Things like pain and suffering are avoided at all costs.  The question I have for you today, is how much is that costing you?  Does pain and suffering have it’s place?  What’s the value of pain and suffering?  Why don’t more of us embrace the suck?

Pain and Suffering:  Who taught you that?

Who taught you that pain and suffering is a bad thing?  And why is it that every person that has changed the world for the better in some way has also had to endure immense pain and suffering?  Let’s just keep it real here.  Regardless of your belief systems, political views or spiritual practices, the people who truly shift the direction of the planet, all had to endure pain and suffering.  Gandhi, Jesus, Mandela, Columbus…  the list can go on and on.  One thing is certain, there is a major difference between those who have achieved greatness and those who have benefited from their sacrifice.

Just go back 160 – 200 years ago.  Imagine having to make your own fire.  Build your own house…  from scratch.  There’s no Home Depot!  You’re in America, you’re going west in search of a better life.  You want to eat?  Kill something or find something to pluck or pick.  Add in the people who are pissed off because they were here first and see infinity from a whole different perspective and because your DVR didn’t record Gossip Girls last night, you’re losing your mind on Facebook.

More importantly who taught you to believe that you are less than Gandhi, Jesus, Mandela or Columbus?  When did you decide you’re average?  When did you accept and settle for that?  Just because technology has made survival easier doesn’t mean you’re destined to channel surf and scroll social feeds while being hypnotized by big pharma convincing you that you have a problem that needs medication.  You are not limited to just getting by.  Any limit you think you have is a decision you’re making.

This energy that keeps your body together does not expire.  This is the same energy that keeps the planets orbiting their stars and makes up the galaxies and the known universe, which is in a constant state of growth and expansion.  The universe is expanding and growing, you are part of the universe, why are you not expanding and growing?  Because it’s hard?  Because there’s pain and suffering involved?  This planet is reshaping itself daily.  Why aren’t you?  Mt. Everest is being created with internal pressure and massive levels of energy and destruction.  And look how beautiful it is.   The people who climb it endure pain and suffering to get to the top and then share in the knowledge of the value of finishing, of reaching the top, of beating their minds and their perceived limits.

You are pure universal energy.  Tap it!  Too tired to workout?  Nonsense.  No time to workout?  Hogwash.  Too tired and no time are symptoms of one thing.  Lack of purpose.  When you’re disconnected from you’re purpose, it becomes very easy to disregard what you know is right.

Pain and Suffering On Purpose

Peel away all the layers here and your purpose will always be found in the service of others.  People tend to be willing to do more for others then their own self.  Now you can do both.  Help yourself by helping others.  Locally, by you training your body and eating correctly, you’re giving others permission and inspiration to do the same.  Globally, you’re now, by participating in the #2017ofEverything Challenges, serving people in need who have a depth of pain and suffering you don’t even know.

Your pain and suffering in these workouts is where you grow.  This is in alignment with the same force and energy that creates mountains and diamonds.  So use these challenges and use Rich Man’s Gym to be your own Mt. Everest.  Be a diamond.  Sharp, hard and shiny.