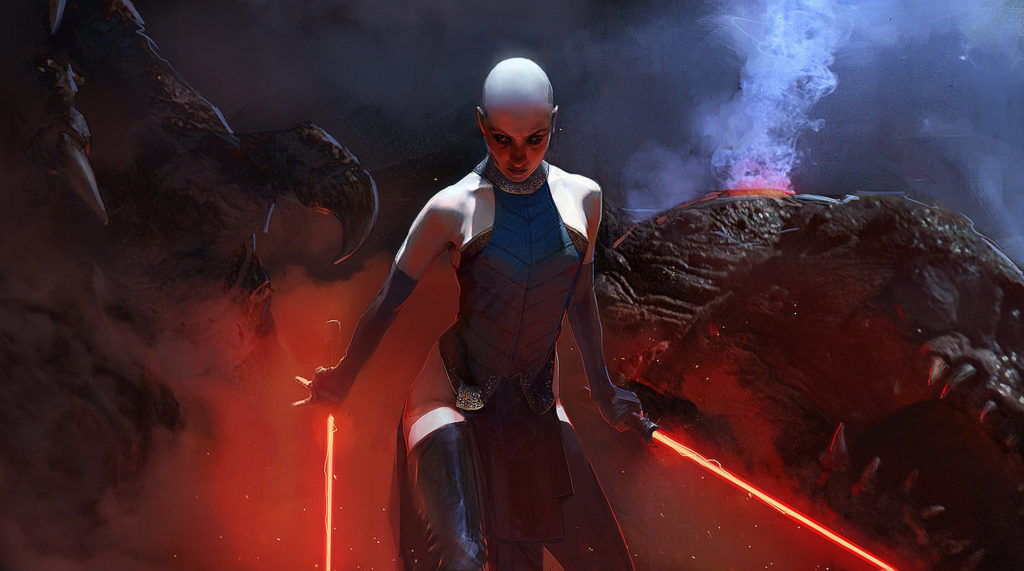 Yvette d’Entremont is a Sith Lord!

The Sci Babe is to me more like the Sci Fi Babe.

Only a Sith deals in absolutes.” — Obi Wan Kenobi

Remember that line from Revenge of the Sith? I do and it rang out loud and clear the moment I started reading TheSciBabe’s opinion piece on Chiropractors on The Outline.  Her absolute?  “Chiropractors are bullshit.”

I saw it when Joe Rogan tweeted it. I’m a fan of Joe. I listen to his podcast and am a huge UFC fan.  I am also, as you know, very much into health and wellness, strength and conditioning and diet and nutrition.  Joe’s got an opinion and I respect that.  Joe also has demonstrated having an open mind and is a critical thinker which is why I was a little surprised to see him RT this clearly one sided article.  Joe also had a bad experience with Chiropractic.

After the broad brush stroke of a title “Chiropractors are bullshit”  Yvette d’Entremont, SciFi Babe goes on to say, “You shouldn’t trust them with your spine or any other part of your body.”  Broad brush stroke number two.  Another absolute.  Who else, in the real world deals in absolutes?

Who else categorizes and labels entire groups of people with no exceptions?

The rest of the article continues with the absolutes and broad strokes leaving little if any room for anyone in the chiropractic community to have any place at the legitimate table.  That, if you ask me, is the real bullshit and I’ll tell you why.

First, allow me to give Darth SciBabe some credit here and state clearly for the record, that there are some pretty shady Chiropractors out there peddling all kinds of snake oil.  There are also plenty of “real doctors” who are currently prescribing pain meds for profit to known addicts and over the years, many an MD has violated all sorts of ethics and the hippocratic oath for the almighty dollar.  Corruption as it goes, exists in every industry.  An absolute I think we can all agree with.

My experience with Chiropractic care.

My first real experience with chiropractic was when I was a little kid.  Neighbor Stephan and subsequent best friend growing up; his mom went to a chiropractor.  I had no idea what that was other than some sort of doctor.  There was a lot of mystery there.  The was also an inversion table involved but we were told not to go near it.

In the mid 2000s I got into kettlebell training.  So much so, I decided to get certified as an instructor in 2009.  Not so much because I wanted to become a trainer but because I wanted the experience of going through the rigorous certification process and I thought if I can get certified to teach others then I must be pretty efficient with the movements myself.

Turns out there is more than one chiropractor who likes the kettlebell.  I met several.  All good people.  Most notable was my team leader, Dr. Mike Hartle.  Dr. Mike is a semi pro football player, powerlifter, large gorilla of a man from Ft. Wayne with a heart of gold.  This man literally has not one single ounce of buffoonery in his massive frame.  He is compassionate, caring and giving.  Doc shoots straight, holds himself and his students to a higher standard and as my team leader, pushed me all weekend to operate at my highest level.  Mike would not let me shortcut, quit or wimp out.  He also made sure I moved with perfect form.

He also failed me.  I paid good hard earned money to be there and did not meet the standard.  I had more work to do to earn my cert. and it took me another 6 months to do it.  This chiropractor is not bullshit.

Now let us move into being treated by a chiropractor.  As my kettlebell training and exercise intensity rose, naturally, my potential for injury climbed as well.  I also did not help matters much because at the time, I was spending a good amount of time in the car or sitting at a desk.  My hips were getting tight.  Sure I would stretch out, do joint mobility, the whole 9 yards but long story short, my pelvis slipped out of alignment causing tremendous pain along the sciatic nerve.  I would rate the pain up there with a kick in the crotch only it’s constant.

Dr. Henn is in the San Fernando Valley, where I was living at the time.  3 blocks away from my apartment.  After one adjustment, she relieved me 75% of the pain and after 4 more subsequent visits over the next two weeks, kept me in alignment, allowing the muscles to relax and taking the tension off the nerve.

Dr. Henn was my go to gal when I lived in Los Angeles.  I would do an adjustment every 4-6 weeks.  Anytime I thought I was out, slipping or felt my performance was lacking do to a structural issue, I was scheduling a visit.  Then my wife started going because she started training in Krav Maga.  Krav is a very intense martial art and there will be injuries.  In a moment, you’ll know why that made perfect sense.

From Dr. Henn’s website:  “Before attending Chiropractic College, Ilanit Henn served in the Israeli army as a combat fitness officer and martial arts (Krav Maga) trainer for 3 years. Her commitment to the soldiers was to help them to reach the height of their physical abilities.”

Dr. Henn is also a wife and a mother who brings a mothers love to her work.  The bottom line here, is if you think this woman is bullshit, then you’re bullshit.

In 2013, I realized a lifelong dream and relocated to the Central Coast of California.  Dr. Henn was 3 and half hours away.  Now what???  Well, if the wife and I were down there visiting family, we’d try to pop in, but it just wasn’t practical.  We needed someone local.  After a little research, I found Dr. Rex.

This man is 110% committed to helping his patients.  He has gone the extra mile for my wife and I on more than one occasion.  Dr. Rex has used x-rays with my wife twice now.  Once when she had a bruised rib from an overly aggressive Krav Maga session and the second time was when she injured her neck and pinched nerves that were radiating down her arm and frozen shoulder was starting to set in.  The x-rays helped him make sure he was qualified to handle the situation.

Long story short, Dr. Rex took care of her, made the appropriate adjustments and had her back in action in 3 weeks.  I know someone with frozen shoulder who is out of commission and in constant pain as a result.  He’s been in this condition for the last 9 months.  He’s had surgery, still takes pain meds, goes to physical therapy twice a week and can’t play with his kids like he used to.  My wife got her neck adjusted combined with traction and deep tissue massage and was back in action in 3 weeks.

NOTE:  He started treatment the day after Thanksgiving, from his home, right after bringing home the family Christmas Tree.

Dr. Rex is an honorable man.  Married, small business owner, father, fitness enthusiast and a complete health nut…  in a good way.  He knows his sh*t, it incredibly well read and articulate.

Calling this guy bullshit is ridiculous. 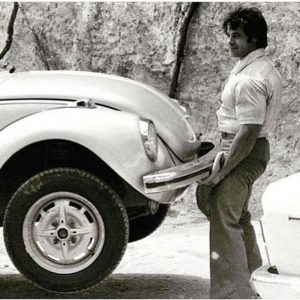 If chiropractic is nothing but a bunch of broken promises and fake medicine, then please, dear God, explain to my why The St. Louis Cardinals and the Rams have a Chiropractor on staff?  Why is there a virtual laundry list of MMA fighters using chiropractic care (Michael Bisping, Rampage Jackson, Fabricio Werdum, Ronda Rousey, Chuck Liddell to name a few)?  And let’s not forget Barry Bonds, Michael Jordan, Evander Holyfield, Joe Montana, and…  Dr. Franco Columbu.  Who?

This guy!  Yeah, the dude deadlifting a VW Bug.  That guy.  Arnold’s best friend, Bodybuilder, Powerlifter and…  wait for it… Chiropractor.

My buddy Jeff and I when we were teenagers nicknamed him Uncle Franco because he reminded us of that.  Your cool uncle.  The guy who teaches you stuff that your parents can’t because you stopped listening to them.  We read his books, took in his advice, hit the weights and guess what?  We got bigger and stronger.  Dr. Columbu is 75 years old, still lifts weights and is a prime example of health.

The real bullshit is her article.  The misinformation and irresponsibility of completely stereotyping an entire industry is staggering.   Recently, I was fortunate to attend The ChiroSushi Summit.  A conference for Chiropractors put on by a company that wants to help chiropractors grow as entrepreneurs and business professionals.  My boss, Grant Cardone was the keynote speaker.  You know what I saw there more than anything?  I saw love.  I saw a large group of humans who straight up gave a shit about people’s health and wellness.  One of the many teachings I’ve learned from Grant over the years was that Service Is Senior To Selling.  That was highly prevalent at The ChiroSushi Summit.

So to wrap this up in one word and also show what I appreciate about Yvette d’Entremont; question. Question everything.  Recently I saw she tweeted a George Carlin quote.  Carlin was all about questioning and challenging authority.  That’s what she does.  She also gets more people talking about healthcare, alternative medicine and addressing the issues.  Good for her.  That being said, to stereotype the entire profession of Chiropractic like that is the real bullshit.  That’s a level of extremism that helps no one and in fact is highly unethical and could result in real people suffering unnecessarily.

Chiropractic offers the possibility of a nonevasive method of treatment that allows a person to perform at their optimum.  Is there snake oil out there?  Are there frauds?  Sure!  We covered that already.  Here’s what you want to do for yourself though, before you see a Chiropractor, interview them.  How do they listen?  DO they listen?  Are your needs put first?  What are their reviews like?  Do they have any reviews?

Be critical.  It is, after all your body.  You don’t have to spend your life in pain.  There is no need to suffer unnecessarily if you don’t have to.  You also should be able to decide on how your body gets treated and cared for based on what you know is best for your body.  Surgery and medication is not the only answer.  There may be a better way to go.  There may be an…  alternative.

1 thought on “Yvette d’Entremont is a Sith Lord”